The Langham was Europe’s first ‘Grand Hotel’ and was opened in 1865 by HRH The Prince of Wales. Apart from the hotel’s illustrious history the hotel also has claimed to be as one of England’s most haunted hotels. Some say it is in the top 10 of the most haunted hotels in England.

The Langham was a favoured Hotel by some of the most famous celebrities of Victorian Society. Their number included the celebrated creator of Sherlock Holmes, Sir Arthur Conan. The playwright, poet, and genius of English Literature Oscar Wilde were also known to frequent The Langham.

The Langham reportedly has as many as seven ghosts. Many of the sightings are from the time when the BBC occupied the hotel. A grey-haired Victorian gent dressed in a cloak and cravat has been viewed in an area once used as a dormitory. This phantom also seems to have blank staring eyes. It is rumoured that this might be the spirit of a Doctor. Legend has it the Doctor murdered his bride while they honeymooned in the hotel. Realising the magnitude of his crime the Doctor killed himself.

The room that was used as the BBC reference library emanates cold spots just prior to the appearance of the ghostly image of an 18th Century footman. He is complete with powdered hair and dressed in blue footmen’s uniform.

The most famous Langham ghost is the male apparition haunting room 333. There have been many famous reports of this apparition. It takes the guise of a man wearing Victorian evening wear. He appears to have his legs cut off, what seems to be, some two feet below the ground. He floats with arms outstretched and eyes staring emptily.

The Georgian House Hotel was built in1851. The hotel was originally built as 3 individual family houses that were probably owned by wealthy traders. This may explain the Hotel’s spiritual activity. Could it be former residents believing it is still their home?

Ghostly activity has reportedly taken place in many areas of this Hotel. Perhaps the most active area seemly the top floors of the hotel. Voices and sounds of children have echoed around the upper corridors. Often the hotel has had guests report that they keep hearing mischievous children. They are said to be running around the corridors giggling, laughing and even banging doors. This is when the hotel has had no children staying in that night.

Whilst staying in one of the rooms, a staff member reported being woke up by an old man sitting on the foot of her bed. He just sat watching her, and then the man just vanished. It was not an intruder, was it an apparition?

There have also been occasions when people talking and laughing have been heard in the dining room. After investigation, it was discovered the area was completely empty. Phantom adult footsteps have also been heard along corridors. When the room temperature falls dramatically a ghostly image has been sighted in the basement staff rooms. Is this the same chilly spirit that has been seen in the kitchens and bedrooms?

Rooms 10 and 12 are rumoured to be the most haunted at the Georgian House. Maybe you will have the opportunity to experience these seemingly friendly ghosts? If you would like further information or to experience this hotel. 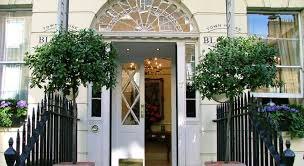 The Grange Blooms was previously an 18th-century townhouse and now is a charming 4-star boutique hotel in The British Museum area.

Another resident ghost is side to be that of a chambermaid. She is not aware that she is not of this earth and still continues to carry out all her previous duties.  Will she still make your bed? If you would like further information or to experience this hotel. Please check out availability via the link.

The Cadogan Hotel was built in 1887. The King’s consort and friend of Oscar Wilde, Lillie Langtry is one of our most famous past guests of The Cadogan. The actress lived at 21 Pont Street from 1892. This became part of the current hotel in 1895 when Lillie sold the house to the Hotel. Lillie remained as a guest and kept her old bedroom, number 109. It is rumoured that Lillie entertained Albert Edward, Prince of Wales the future king in room 109. The beautiful Lillie Langtry died on the 12th of December 1929. Since then her ghost has been seen around Christmas in her old drawing-room, now the Salon Langtry. Lillie, although being used to the limelight as an actress, prefers to show herself when there are few guests around and the hotel is quiet. Incidentally, room 118 is where Oscar Wilde was arrested. He was arrested for Gross Indecency in 1895 after accusations concerning Wilde’s homosexual behaviour. If you would like further information or to experience this hotel click the link above.

One thought on “London’s Most Haunted Hotels”